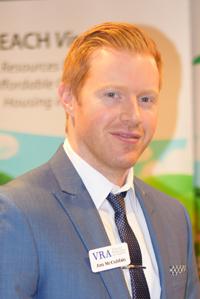 The VRA would like to thank its outgoing controller, Jon McCubbin, for his dedicated service, and congratulate him on his new position as Accounting Manager for the Winebow Group.

Jon joined the VRA in January 2009 as a Fiscal & Administrative Manager. Jon was the first VRA staff member to be elected as an Executive Board member of the Virginia Government Finance Officers' Association (VGFOA), where he served as the chairman of the Communications Committee.

During his time with VRA, Jon brought the organization's Comprehensive Annual Financial Report (CAFR) preparation in-house. Since FY2009, each CAFR has earned certificates of excellence from the GFOA.

The Winebow Group is a national importer and distributor of fine wine and spirits from around the globe. Jon secured his position with the Winebow Group after the organization moved its headquarters from Portland, Oregon to Henrico, Virginia.