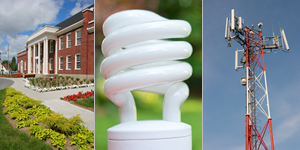 VRA was proud to assist with a $185,650,000 loan to Alexandria Renew Enterprises (AlexRenew) to invest in healthier waterways for Alexandria.

The loan for the RiverRenew Tunnel System Project, which closed on February 4, was supported through the Clean Water Revolving Loan Fund (CWRLF). VRA serves as financial administrator for the fund, working with the Department of Environmental Quality, which administers the program and policy aspects of the fund on behalf of the State Water Control Board. This loan represents the single largest loan in VRA’s 37-year history.

Like the Cities of Richmond and Lynchburg, Alexandria’s combined sewer system traces its origins back to the 1800s. With dated infrastructure, during rain events combined sewage overflows from four existing combined sewer outfalls, posing an environmental risk to nearby residents and wildlife.

This project called for innovative engineering to replace infrastructure that had been in place for well over a century. The answer to this challenge is to construct a two-mile-long, 12-foot-wide tunnel, which includes shafts and other sewage infrastructure. Ultimately, this solution will provide a major environmental benefit to Alexandria, and the region, by reducing the current volume of combined sewage from 140 million gallons down to less than 17 million gallons and preventing it from polluting the Potomac River, and its watershed, each year. To put it into perspective, this volume equals 1.4 billion cans of soda.

In 2017, the General Assembly enacted legislation requiring the remediation of the state’s combined sewer systems, requiring that they be in compliance with state law by July 1, 2025. Following this action, AlexRenew, working in partnership with the City of Alexandria, began work to implement what it named the RiverRenew program.

Like many of the projects that VRA supports, the RiverRenew Tunnel System Project has a regional benefit for residents in Alexandria and across much of Northern Virginia.