In August 2013, Accomack County borrowed approximately $3.8 million from the Virginia Pooled Financing Program (VPFP) to finance utility and road improvements in the Wallops Research Park, located adjacent to the NASA Wallops Flight Facility (WFF) and the Marine Science Consortium on Virginia's Eastern Shore. The VPFP loan provided local matching funds needed to receive a $4 million grant from the Commonwealth related to the project. Plans for the $8 million investment include a new 1,200 foot taxi way to connect the Wallops Research Park to the NASA Wallops FAA-towered airfield, 8,000 foot runways, water and sewer connections, industrial roads and lighting and utilities, and other improvements. The 320- acre Wallops Research Park is still under development and this site has been designated by the Virginia Economic Development Partnership as an economic priority area because it contains unique real estate assets suitable for major employment and investment projects.

Wallops Research Park is expected to play a key role in the long-term economic development of Accomack County and is critical for the anticipated industrial and aerospace companies that will benefit from being in close proximity to the WFF and Mid-Atlantic Regional Spaceport (MARS). Wallops Research Park is also expected to create numerous opportunities for local businesses in Accomack County.

The Federal Aviation Administration (FAA) is playing a vital role in the development of the Wallops Research Park. The FAA is the agency that provides licenses that permit states to launch spacecraft into orbit. Virginia is one of only four states that has such a license, providing the Commonwealth with a distinct competitive advantage for future aerospace-related investment. Governor McDonnell has praised the accomplishments that have occurred on Wallops Island. Referring to the U.S. Air Force launch that took place November 19, 2013, the Governor said, "Virginia is honored to have played a role in another successful launch. I commend the Department of Defense and the Orbital Sciences Corporation for their efforts. The Commonwealth stands ready to continue its support of future missions."

Accomack County is a 476 square mile county in the northernmost part of Virginia's Eastern Shore. The County welcomes this significant investment in its future. The WFF is home to unique and valuable assets that can be used in federal, state and private sector development, and the completion of this project is expected to bring economic growth and new jobs to the area. 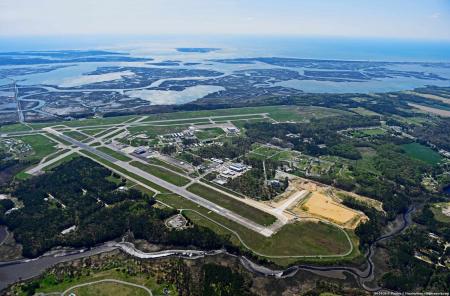