Radford is known for many things, including being one of Virginia's great college towns. In addition to the over 16,000 residents and students who call Radford home, this Southwest Virginia community also is a mecca for tourists. Many of these visitors are attracted to the New River and Radford's numerous outdoor activities. Fortunate to have so many amenities, you could say that Radford has the "full package" of resources. Wanting to maintain the accessibility of these resources to the residents and visitors who use them is what prompted City leaders to pursue funding through the Virginia Pooled Financing Program (VPFP) for the Park Road - Second Avenue Improvement Project.

In order to finance this road improvement project, Radford borrowed $2.885 million from the VPFP. This project also qualified for contributions from other sources, including a 'Safe Routes to Schools' federal grant and Revenue Sharing funds from the Virginia Department of Transportation. The entire project cost totaled $5.94 million. Project construction is expected to be complete by Fall of 2015.

The Park Road - Second Avenue corridor serves as an important artery between two schools, Belle Heth Elementary and Dalton Intermediate, and also is a major east-west connector for City residents and visitors alike. As the local traffic flow continued to increase, Radford made the decision to make infrastructure investments that would keep pace with that growth. Once this project is finished, it will provide for extensive safety improvements, including new bike lanes, sidewalks, storm drainage and street lighting.

"The traffic calming elements of the project are very important from a safety perspective," said City Manager David Ridpath. "However, we're also very excited about the aesthetic appeal of these improvements and how they will contribute to the community curb appeal of this heavily-travelled corridor. Importantly, we also will be able to make these upgrades in an environmentally responsible manner by allowing for improved stormwater drainage."

The City of Radford is committed to providing reliable and safe roadways to its residents and visitors. In partnership with Radford, this project is another example of how the VPFP supports VRA's mission to help build and maintain vibrant and safe communities. 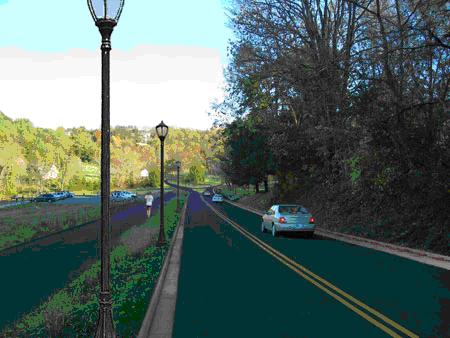