The City of Winchester, rich in history, holds many notable distinctions. One such distinction is that it operates one of the oldest water and sewer systems in the United States. In fact, the only cities that have older water mains still in service are Philadelphia and Allentown, PA.

The age of the existing water mains, many of which are over one hundred years old, have contributed to several different problems for the City. Not surprisingly, the age of the system has resulted in frequent leaks and main breaks. Also, many customers have regularly reported low water pressure due to the small, two-inch diameter of some of the mains. In light of these challenges, Winchester was seeking a solution to better serve its residents, and this is where VRA came into the picture.

In 2010, Winchester requested financing for a plan to upgrade its water treatment plant and for continued restoration of water and sewer main replacements. The total project cost of approximately $6.5 million was supplied from several different sources, including VRA 2011B Virginia Pooled Financing Program Funds ($3.5M), a Drinking Water Grant ($1.5M) and the Drinking Water Revolving Loan Fund ($1.5M). Work on the North End Utility Replacement project started on September 12, 2011, with completion expected by late summer 2012.

The City of Winchester is committed to providing reliable and safe water and sewer services to its residents and businesses. As part of this comprehensive program to replace its entire underground water and sewer infrastructure, the City intends to replace at least two miles of water and sewer mains each year. VRA's mission is to help build vibrant and healthy communities, and we are proud to partner with Winchester and the Office of Drinking Water on this important project. 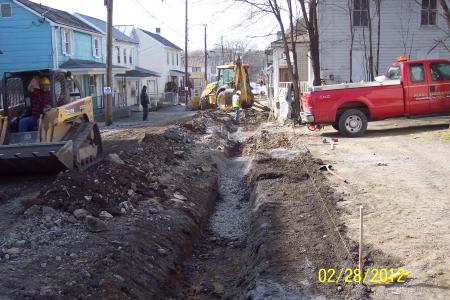